The “Capitular” or Chapter Degrees of Freemasonry refers the four degrees of the York Rite system that follow the “blue lodge” or “Craft” degrees. The Holy Royal Arch is the final degree and the culmination of the Chapter experience for a candidate. The Chapter is the second body of the York Rite of Freemasonry, though in some Jurisdictions it is considered the completion of the initial three degrees and is part of the Regular Craft experience.

The Grand Chapter of Royal Arch Masons of New Mexico which in turn chooses allegiance to the General Grand Chapter of Royal Arch Masons. A Master Mason in good standing starts his York Rite experience in New Mexico in his regular Lodge, and continues by choice and petition into the balance of the York Rite Degrees and Orders by receiving the Chapter Degrees first, then continuing (if he chooses) on to and through the Council Degrees and Commandery Orders. The Chapter Degrees include:

Upon completion of the Degrees, the Candidate is addressed as "Companion", and is referred to as a Royal Arch Mason. 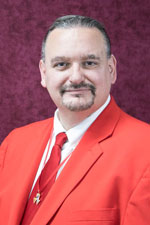