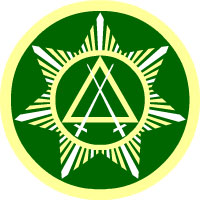 The history of the Judean people, as contained in the Roll of the Law, including the books of Ezra, Jeremiah and Esdras, records three outstanding episodes intimatley connected with Irish Universal Masonry:-

So by becoming a Knight Mason you are completing a sequence intimately related to the teaching of Masonry.

There are three Degrees in Knight Masonry formerly known as the Red Cross Degrees;

Master Masons having become Mark Master Masons and Royal Arch Masons, may after one year become Knight Masons. They may request to join a Council, they do not have to wait to be asked. By becoming a Knight Mason one discovers a closer degree of intimacy and friendship; as there are a relativly small number of Knight Masons' Councils, members are encouraged to visit other Councils where they will always be made very welcome.

There are Knight Mason' Councils throughout Ireland and they can also be found in the United States of America, South Africa and as far afield as Hong Kong.